For this Hispanic Heritage Month, we want to spotlight influential Hispanic architects and engineers and their contributions to the world of design.

For this Hispanic Heritage Month, we want to spotlight influential Hispanic architects and engineers and their contributions to the world of design. From Mexico to Argentina, architects from these countries have greatly influenced how architecture is seen today. 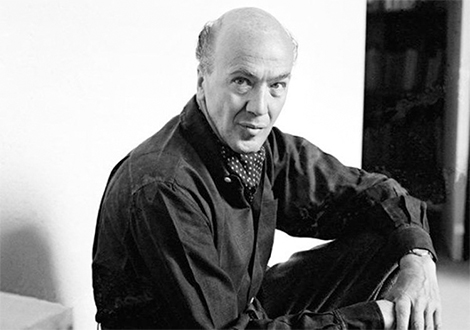 Luis Barrgán was a Mexican architect and engineer born in Guadalajara, Jalisco. His architecture career began when he was just 23 years old with a newly minted degree in civil engineering from the Escuela Libre de Ingenieros. To become an architect, he took on additional coursework. After graduating, Barragán took two years to travel in Europe. It was there that his interest in architecture and design truly blossomed. He marveled at the influence that Mediterranean and Muslim culture had on European architecture, as well as the gardens that were spread throughout the cities he visited. While in Europe, Barragán often attended Le Corbusier's lectures and read about designer and artist Ferdinand Bac, and even visited his gardens. He was influenced by European modern architecture and its marriage with natural spaces. He officially began his architect career after returning to Mexico in 1927.

Barragán’s work is recognized by the use of raw materials like adobe, stucco, and timber and other natural elements like water, light, and color. He was part of the Escuela Tapatia Movement which held a vigorous adherence to regional traditions and thus influenced his work with nature. Although minimalism isn’t often associated with the use of color, the opposite is true for Barragán’s minimalist style. His combinations of color and the use of light, specifically hidden light sources, were staples in his work. Barragán’s accolades range from a retrospective at the Museum of Modern Art to a Pritzker Architecture Prize in 1980, the equivalent of a Nobel Peace Prize in architecture. Luis Barragán passed away in 1988. His home, Casa Luis Barragán, was dubbed a World Heritage Site by UNESCO in 2004. 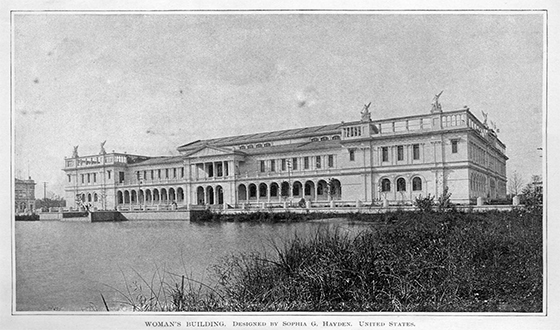 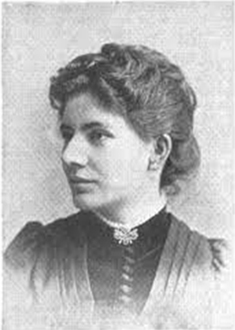 Sophia Hayden was a Chilean architect and designer born in Santiago, Chile. Hayden spent most of her childhood in Chile but would later move to Boston to go to school and be with her grandparents. She took up an interest in architecture and would eventually enroll at the Massachusetts Institute of Technology in 1886. Here is where she made her most notable career developments. Hayden was part of the small cohort of women who were enrolled at MIT and was the first woman to be admitted into the school’s bachelor’s program for architecture. Her culminating work at MIT became her thesis for a Museum of Fine Arts. Inspired by the Italian Renaissance, Hayden’s thesis showed serious aptitude for design and practical knowledge. In 1890, she graduated with honors, becoming the first woman to obtain a bachelor’s degree in architecture at MIT. Although Hayden was an ivy league alum, her internship prospects were slim to none. Shortly after graduating, she settled for a job teaching mechanical drafting at a school in Boston. It wasn’t until 1891, that she scored her first commission.

In 1891, the Construction Department of the World’s Columbian Exposition announced a competition. They were to commission a female architect to design and execute the construction of their women’s building. There was much backlash from the men who felt they were alienated for the competition for no real reason and from women who felt slighted by the segregation of their work to a separate building, and by the prize amount - a $1,000 prize compared to the $10,000 prize for a man’s design of the same stature. Despite this, Hayden entered the competition and won. In construction, Hayden faced many setbacks including an expedited finish time, objections to her designs, and most notably, a last minute addition of a third floor. Her resistance to interior design changes would ultimately cost her her job and mental well-being. It is reported that after pushing to not use the department’s donor’s material contributions, Hayden would air out her grievances resulting in her termination and a trip to the doctors for an overwhelming amount of stress and exhaustion. When her building was finished, critics dispelled Hayden’s efforts, exclaiming that her work was “more lyric than an epic”. The women’s building was torn down just two years later. Hayden never practiced again, however, her efforts are heralded for paving the way for future female architects that have helped give rise to contemporaries like Tatiana Bilabao and Frida Escobedo. 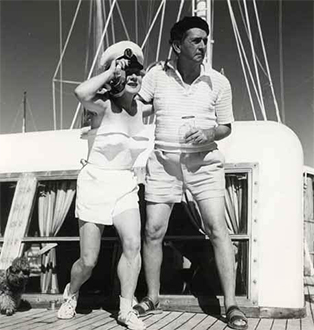 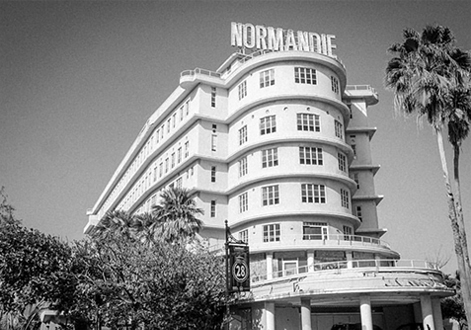 Félix Benítez Rexach was a Puerto Rican engineer born in Vieques, Puerto Rico. Benítez also designed the Port of Santo Domingo, bridges, and a street - Avenida Jorge Washington. However, his most notable architectural contribution was the Normandie Hotel - a hotel dedicated to his wife, Lucienne Suzanne Dhotelle, who was a famous French singer known as La Môme Moineau. It was said that they had a strong connection and shared a closeness like no other. Lucienne stuck beside him during the turmoil of the Great Depression. To show his appreciation, Benítez bestowed her many gifts. One of these was the Normandie Hotel, built as an anniversary gift to her. It was rumored that Benítez had met his wife on board the SS Normandie. This was later debunked, however the sentiment that Benítez built the transatlantic hotel as a gift to his wife was true.

Although not designed by Benítez himself, the Normandie Hotel was his brain child. It became one of the first luxury hotels in Puerto Rico. It sported Art Deco elements and detailing from various artists from across various countries. Famous actors and actresses like Robert Taylor, Jorge Negrete, and Maria Felix enjoyed the hotel’s hospitality and vigor. The hotel lobby had a swimming pool in the center of the lobby where Lucienne often enjoyed a swim. It’s grandiosity was exacerbated by a great “Normandie” neon sign that was taken from the SS Normandie. Unfortunately, its luxe did not withstand the test of time. It has been abandoned since the early 2000s, and will soon be demolished. 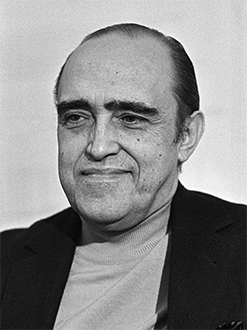 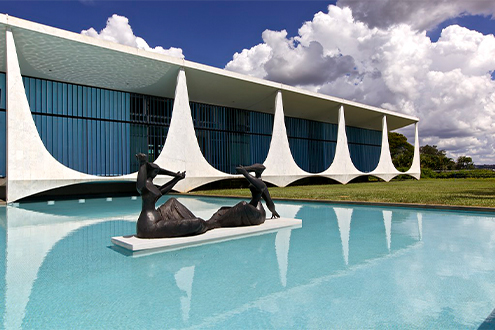 Oscar Niemeyer was a Brazilian architect and pioneer born in Rio De Janeiro. He was an architect most notable in the Brazilian modernist movement. Niemeyer had an extensive career beginning with his education. He studied at the Escola Nacional de Belas Artes at the Federal University of Rio de Janeiro. Neiymeyer graduated in 1934 with a bachelor’s in architecture. Soon after, he began working with his father and was also a draftsman for local architectural firms. Niemeyer was insistent on working with the greats of his time. Despite receiving little to no compensation, he took on an internship with Lúcio Costa, a leader in the modernist movement. He interned for him from 1937 to 1943 and worked on many great projects alongside Costa. These included the design of what’s considered to be Brazil’s first exemplary contribution to the modernist movement - the Ministry of Education and Health.

Niemeyer had an impressive collection of architectural works beginning with his first solo project. He was commissioned to plan a complex in Pampulha by the mayor of Belo Horizonte. Surrounding an artificial lake, he designed and built a church, casino, dance hall, restaurant, yacht club, golf club, and the mayor’s weekend retreat, all of Niemeyer’s design. When the mayor became president, he commissioned Niemeyer to design the new capital city, Brasilia. He would later design the presidential palace, the Brasilia Palace Hotel, the Ministry of Justice Building, and the presidential chapel and cathedral. He would later serve as the chief architect for the NOVA-CAP (the authority of government buildings in Brazil), as well as served as the representative for Brazil in the planning of the United Nations building in New York City in 1947. His work was recognized internationally having been exiled from Brazil during the 1964 military coup. He was recognized with awards like the Lenin Peace Prize in 1963, the Pritzker Architecture Prize in 1988, and the Japan Art Association’s Praemium Imperiale Prize for architecture in 2004. Even after having reached 100 years of age, he continued building. Nieymeyer died at the age of 104. 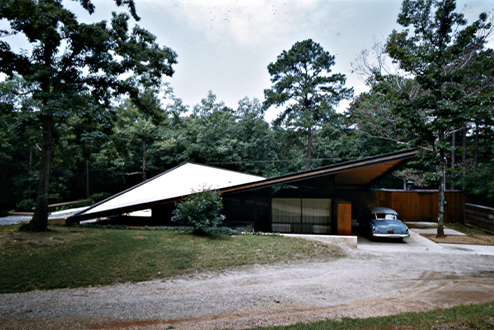 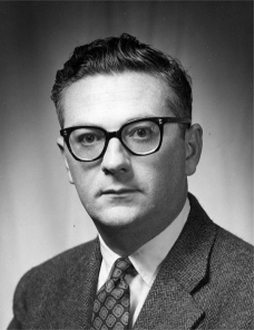 Eduardo Catalano was an architect born in Bueno Aires, Argentina. His education began at Buenos Aires University where he won a scholarship to the University of Pennsylvania to study architecture. For his postgrad, he attended the Harvard Graduate School of Design where he studied under renowned architect Walter Gropius, master of modernist architecture. He would design and build the Ariston Club with famed Marcel Breuer, another big league player in the modernist movement. His expertise was noted and sought after by the Architectural Association in London where he taught until 1951. Henry Kamphoefner, the Dean of the School of Design at North Carolina State University, recognized Catalano’s academic prowess and invited him to lecture at NCSU in Raleigh, NC. Then in 1956, he moved to Boston to teach at the Michigan Institute of Technology until 1977.

Catalano designed for many major academic institutions and is credited with the Lincoln Center at the Juilliard School of Music and the Stratton Student Center at MIT. However, his legacy lives on through the home dubbed the Catalano House, also known as the Raleigh House. His most notable work was co-signed by Frank Lloyd Wright who praised him for the house saying, “it is refreshing to see that the shelter, which is the most important element in domestic architecture, has been so imaginatively and skillfully treated as in the house by Eduardo Catlano”. After many owners and a couple years of neglect, the Raleigh House became inhabitable and was eventually demolished in 2001. Catlano petitioned to have the roof rebuilt on NCSU grounds but was met with great opposition. The school suggested an alternative site but was later shot down by Catalano for being too far from the campus. Despite having made a sizable endowment of $1 million to NCSU, the Raleigh House was never rebuilt.