The Design Competition was created in 1985, and the rules are and always have been very simple:anyone can enter! No professional credentials required - anybody can submit their product ideas no matter how unusual, even those that people may think are “not good enough”. A model or prototype is helpful, but not necessary - a drawing, or even a detailed description will suffice. The objective was to open this up to a larger audience to drive innovation and to give the winners a chance to see their product idea come to life.

Even after three decades, every year is just as exciting as our first. Our jury is always faced with the impossible task of finding the best pieces that are not only uniquely innovative, but also functionally sound. Oh, and find those extra special gems amongst hundreds of brilliant entries!Never easy, but always exciting. This year was no different and we are happy and proud to announce our four winners. Yes… sometimes there are so many good ideas that we can’t just stick to one winner!We were in for a couple surprises this year. First, we had a repeat winner, then we learned that the other three winners are all students, and further that they are all at the same school...in the same class! Kudos to the class of 2017 - welcome designers of tomorrow. We talked to the winners and they told us about the idea behind their design and a little bit about themselves. So, keep reading to get to know our design winners: 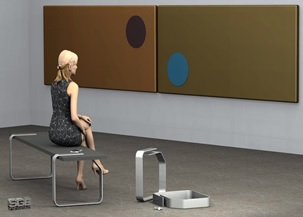 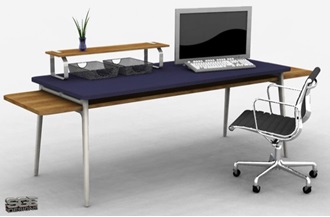 “I’ve been a designer and maker since my teens…I’m always creating something. I even patented a support cradle for laptop computers, called the LapLift. My main design focus has been on creating control rooms and studios for television and radio broadcasting, and I’m still working in that field today.
I designed SHELFMAKER, the 2016 Doug Mockett Design Competition winner. SHELFMAKER is a pair of simple metal legs, which turns any ½” thick board into a sturdy desk shelf, with no tools required…!
The concept for SHELFMAKER came about while doing renderings for a cabinetry project. I felt that adding a small shelf would help to illustrate the scale of the cabinets, and so I began sketching, building 3D models and rendering the design. After I was satisfied in the virtual world, it was time for physical prototypes, and thanks to Home Depot and Michaels being open on Sundays, I was able to make and test a half-size prototype from aluminum and plywood. And it worked great…the little shelf was strong and secure…!
While doing the renderings, the scale kind of played tricks on the eye, and sometimes the little shelf looked like a full-size bench. So to show the intended size for SHELFMAKER, I added an iPhone sitting on the shelf for reference. In my entry though, I also mentioned the possibility of making the larger version for seating, like a museum bench, and called it “BENCHMAKER”. Well…as it turns out…at first everyone at Mockett thought this was SUPPOSED to be a bench…! It’s really cool…we’re now talking about making two sizes…!”

"I am a senior at Appalachian State University, studying Industrial Design. For my first senior studio project I was given the option to design an entry for Mockett, which is how I found out about the design competition. I started designing coat hooks purely for aesthetics. I wanted to think of them more as a home accessory, before I focused on the functionality of the product. I took this path because I felt that this particular product has its functionality integrated into itself so it was more important for me to focus on perfecting the form. I looked towards fluid, transitional movements to inspire a sleek, modern design. Winning one of the first place prizes is priceless to me. It should go without saying that it is the dream of any designer to have one of their ideas not only recognized, but brought to life. Having the chance to have this happen before I even finished my degree has been unreal to me. I highly encourage anyone that has a vision or idea to enter the Mockett Annual Design Competition so that you may get the same chance."

“Hey, my name is Richard Bell. First of all I would like say thank you to Doug and nice people there in Mockett for choosing my product. We first learned about the competition through our designer professor, all of us being seniors at Appalachian State University studying industrial design with focus on product design. We took on the competition as just a senior project and if we liked our product we could send them in and let you guys at Mockett judge for us. When I was looking to enter the competition I looked at the past winners and overall style of the company. So, what I wanted to do with my design was to make a simple panel bracket that was like a merge a mashed up old and new kind style. Winning the competition was a surprise, super awesome. Like I said I don’t think any of us expected to win, but we are all definitely happy when we heard the news. My advices for anyone thinking about entering the competition: just do it! You don’t have anything to lose by entering the competition, just everything to gain. Also if you are trying to decide between one or two, or three even, just go ahead and submit them all in because maybe you may not think it’s the best, but somebody else might think is just awesome, amazing. Also I wish I’ve known about the competition a lot sooner prior this year because I definitely would have been entering the competition in the past few years!” 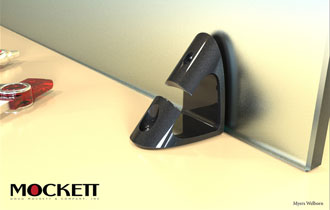 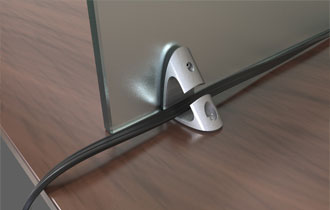 “Hey guys, My name is Myers Welborn, I’m a senior product design student at ASU and I have been awarded 1st place for designing the M1 divider bracket that I entered into the 31st annual Mockett Design Competition.  I found out about this competition through a project we were assigned in my senior product design studio at ASU last fall.  Our assignment was to learn Mockett’s design language and come up with a piece to be entered into Mockett’s design competition.  My process for the M1 was pretty straight forward.  I studied Mockett’s current line up of products and came to the conclusion that architecture and aerospace seemed to be heavy design motifs used throughout.  When deciding on a specific direction of product to design, I saw improvement opportunities on some of the divider brackets currently being sold and decided to move forward with a strong, sleek bracket that also had a secondary purpose of storing electrical cords.  Thus, the M1 was created.  I have been designing and creating things in my Dad’s home workshop since I was strong enough to wield a hammer, and always aspired one day to say that I have successfully produced a design that is being manufactured and sold to any degree.  So winning this competition is huge for me in fulfilling one of my lifelong aspirations.  To anyone who is thinking about entering into next years’ competition, my advice is to really study all of Mockett’s products, current and past, and try to create a design that fits into the Mockett style, something that you can look at and imagine seeing it on their website.  This project was extremely fun to design for and the creativity involved is endless.”

Feeling inspired? Be sure to enter our 32nd Annual Design Competition; deadline is on September 6th 2017. You might be the next great Mockett’s designer!